Trying to write some stories. Obviously current events do have an influence. This is a first attempt and I might finally put it in that book of kidult stories and poems I’m trying to write. Please read on.

The president of the world slowly opened one morning eye. He blinked a few times then stared a long one-eyed stare at the world from under his thick presidential duvet.

The sun was shining. It was a lovely day and he was the President of the world and he could do anything he wanted, and this morning he didn’t want to get out of bed. Presently, the President opened a second presidential eye and was just wondering, how to stay in bed all day and rule the world at the same time, when, suddenly his presidential stomach started rumbling.

“I’m president of the world and I want my breakfast.” He declared, just loud enough so the Presidential butler in the next room could hear him.

The presidential stomach rumbled louder and louder like a tin can in a tumble dryer.

“I’m president of the world and I want my breakfast” screamed the president. Presently there was a polite, measured, courtly knock on the presidential bedroom door.

“Come in” shouted the President. Yippee! Breakfast!”  He squealed. “Have I got choco pops and bacon and pancakes and maple syrup and … “

The butler bumped the door open with his bum,  backed his way into the presidential bedroom, labouring under the weight of a heavy breakfast tray, He turned to look at the President. He drew a short, shocked butler breath and collapsed. The silver breakfast tray fell to the floor with a clatter and a loud smash. The crashing and clattering was enough to bring the Presidential secretary running into the room. She took one look at the President. She screamed and fainted. In rushed the Presidential secretary’s secretary, she too screamed and fell to the floor. It took several secretaries screaming and fainting before it dawned on the President there might be something wrong. He climbed out of bed, clambered across the multiple secretaries strewn all over his bedroom floor and went to look at himself in the mirror above the mantel piece.

“Oh my Frogs!” he declared staring at his reflection. Gone was his uncontrollable, impossibly blonde bouffant hair. Gone was his permanent orange pallour, instead he had spikey green hair, his face was yellow, his nose was turning red and worse still he could feel feel his face muscles contorting into a huge, wide smile.

“Help!” hollered the President. In rushed a legion of security guards. As they burst in, brandishing their guns, they stopped dead in their tracks when the President turned to face them. They stared.

“Get the vice President” ordered the chief security guard.

In rushed the vice President.

“Get the Presidential doctor,” yelled the Vice President

In rushed the presidential doctor. He stared at the President and then started to back away.

“Everyone get out the room” he boomed.

The security guards dropped their guns, turned tail and fled, carrying the Vice President and the presidential doctor with them. They slammed to door shut and locked it.

“Bar this door,” ordered the Presiential doctor. “No one must enter or leave the Presidential bedroom.”

“What is it?” demanded the Vice President?

The presidential doctor, wiped his brow, drew breath and then pronounced the words “clown virus”.

“Clown Virus” repeated the Vice President, who had never heard of this before

“Possibly the worst case of clown virus I have ever seen.” Added the Presidential doctor.

“Clown Virus? Are you sure?” queried the vice president.

“Has the President been in contact with any clowns recently?” asked the doctor

“I mean real clowns,” asserted the Presidential Doctor, more than a little annoyed at the Vice President’s attempt at humour.

“Well yesterday was the President’s birthday and he had a small party. A few hundred friends with balloons, jelly, cake, party games, a magician and a few clowns. It was a quiet affair. Not even the President’s closest advisers were aware of the party until some of the guests got lost whilst playing Hunt The Bomb.”

“Hunt the Bomb?” repeated the Presidential Doctor, more than a little surprised.

“Yeah, not a real bomb, just a neutralised nuke. Hey this place is too big for thimble. Bombs are easier to find.”

“I guess so,” replied the Vice President, “he took part in balloon-sculpting and face-painting and then he shook everybody’s hand before they went home with a slice of cake and a balloon.”

“Who was at the party?” demanded the doctor adding that he’d need a full guest list.

That evening there was an official medical briefing from the Presidential doctor.

The Presidential Doctor cleared his throat.

“Ladies and Gentlemen” he announced. “We have a serios problem. This afternoon following close examination and testing The President of the World has been diagnosed with extreme clown virus. He has been put int isolation for a few weeks and we are currently working on a cure. In the meantime he is not to be approached. As far as we know there are two ways of contracting clown virus, the first by physical touching a clown, the second by being in close proximity to a clown when they laugh.”

A presidential adviser raised his hand to field a question.

“Sir, what are the symptoms of Clown virus and who can catch it?”

“Potentially no one is immune” said the Presidential doctor, “though I would like to clarify one point, only those with a clown-like disposition are most at risk.”

There was an audible shocked murmur around the room. Surely the Presidential Doctor was not suggesting that the President of the World was a clown?

The Presidential Doctor continued, raising his voice to silence the murmuring

“The symptoms Ladies and Gentlemen are the following. In a serious case like the President, there will be physical clown like manifestations such as a change of hair and skin colour. The muscles of the face will contract into a clown-like smile for the duration of the virus. Over a few days a person’s voice may change into a more squeaky clown-like mode. At the most serious stage of the disease , and this is why we insist on isolation and lockdown, the victim will indulge in clown-like antics, anything from a need to perform second rate magic tricks to more serious incidents such, tripping people up, pulling chairs from beneath them as they go to sit down, thrusting custard pies into other peoples’ faces or  throwing buckets of water or paint at them. This is why for your own safety, you must avoid the President .”

“That sounds no more stupid than what the president already does” muttered the Vice President under his breath. 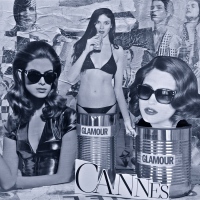