So, you want to buy a violin. Why not nip along to your local Luthier or violin maker and get one made.  There are 298 luthiers in France making  and repairing a variety of stringed instruments from guitars through to double basses. Far from a dying art, the profession of Luthier is alive and well. The trade offers enough satisfaction and financial reward to still be a viable career choice, even if the raining is long and expensive.  Recently, I went to meet 29 year-old Ugo Janer, a freshly qualified Luthier who has just set up shop  in Bourges.

Legend has it the Nero was fiddling while Rome burned. Does the violin really go back that far?

The violin is a very old instrument. I’m not sure of it goes all the way back to ancient Rome. You’ll probably find that Nero was plucking rather than fiddling. The ancients had harps or lyres. There were certainly stringed fiddle like instruments in medieval Europe. The true « father » of the modern violin though emerged in sixteenth century Italy in Brescia, then later in Cremona, the home of Antonio Stradivari, the most famous violin maker of all time.

How do you become a violin maker?

It takes five years of long hard training. I trained at Newark near Nottingham in England. Over the five years I learned how to make and restore violins, violas, cellos and double basses. In English you can also refer to a violin maker as a luthier

Why did you become a luthier?

First of all a passion for music, especially the violin and secondly curiosity. I enjoy taking things apart to see how they work then rebuilding them. I guess you could say that I enjoyed fiddling about from an early age so it only seemed natural to make violins

Obviously there is a market for hand made violins, but who buys them?

Hand made violins are very expensive. Prices start around 5000€ to 6000€, so, they are not for beginners. When children start on the violin, rather than buy one, I advise the parents to rent one. You can never be sure if the child will carry on with the violin, it is a very difficult instrument.  Hand-made instruments are reserved more for professionals or serious amateurs. Every violin is unique.

So, how do you make a violin?

Actually making the violin takes about a month and a half, of painstaking work. There are over seventy parts in a violin. Before making an instrument though, I have to get to know the client. Violins are very much made-to-measure. The player must be in perfect symbiosis with the instrument. The violin you make for a virtuoso won’t be the same as that for a serious amateur. Though the shape and size of a violin will never change.  The luthier can change the « signature » by varying the thickness of the wood on the sound box or the fingerboard. The thinner the wood, the better the sound.

What sort of wood do you use?

Maple for the front and spruce for the back. The wood has to be well seasoned.  It is normally left five years to dry out, though the older the wood, the better. The wood we use also has to be evenly patterned. For the fingerboard and the tuning pegs we use ebony. It is rumoured that for his violins Stradivarius only used wood from trees in which nightingales had sung.

Varnishing is also an important process. This is the point where as a luthier, I can « personalise » the violin, either by the colours of varnish that I use, or the different patterns I can build up over the layers. The colour palette ranges from yellow, through all the shades of brown up to a deep and vibrant red. The varnishing not only enhances the instruments looks, but can also change the sound. Many luthiers have their own top-secret varnish recipe.

Is it true that many professional violinists prefer to play on an older classic violin than a new one?

Many violinists have « an old master » in their collection.  Classic or antique violins are very sought after. The older the violin, the better the sound. I think professionals enjoy playing on an  « old master » because they feel they are plying on a work of art or a part of musical history.  Prices of classic violins though can attain ridiculous levels. At auction, a «cheap » Stradivarius can fetch around $1.5 million. It may be pressure or simply fashion, but many young professionals even feel obliged to have a classic violin. Even a « cheap » one starts at around $300,000.

If  « old masters » can command such high prices, restoration must be a very tricky job.

When we restore an old violin it is for two reasons: either the violin has been damaged so we have to repair the body, or, the musician wants to alter the sound of his instrument, in this case there is a long consultation with the musician about the exact sound he or she is looking for and the changes that need to be made.

Why would a violinist want to change the sound of his instrument?

The musician wants the violin to evolve with his playing style or perhaps the style of music he is playing. He or she might also want to give more voice to his instrument. For example a classic violin would originally have been designed for playing in smaller venues than today’s large concert halls.  The violin is also originally a baroque instrument and would have had strings made of catgut. Changes in music and the way it is performed have forced violinists to seek more power from their instrument. The catgut strings have been replaced by metal cords. These place greater stress on the instrument, therefore it needs to be reinforced, without losing the original sound but at the same time giving a stronger sound. I suppose in this case we are not talking about a restoration but a modification or even a modernisation.

It seems like there is a different violin for every kind of music. Could you play an Irish jig on a Stradivarius?

If you really wanted, but it wouldn’t sound right.

There are plenty of cheap Chinese violins on the market nowadays. How are you fairing against the competition?

True, for the past forty years, the Chinese, the Japanese and even the Koreans have been very active, however « made in China » doesn’t essentially mean a bad quality product. There are some excellent mass-produced Chinese violins – I even sell some. They are ideal instruments for beginners. 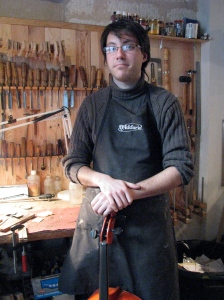 As a luthier in a small town, do you manage to make a decent living?

The fact I’m in a small town doesn’t actually make a lot of difference. Professionals in search of a quality handmade violin are ready to travel far and wide to find the right instrument. My customers come from all over France, it matters little to them whether they buy a violin in Paris or in Bourges. They just want a quality instrument. For the price they pay, they are willing to travel. In Bourges we also have a large music school, so there is enough day-to-day business in selling and repairing all string instruments. Sometimes though there is too much everyday business, which means I have no time to concentrate on my first love, which is making violins.  That’s why I became a luthier.  Mind you, I like restoring violins too. Every instrument has a story, taking apart a violin tells you a lot about the luthier who first made it.

This is my first year in business. I took over from another luthier who used to have a shop on the other side of the street. There has always been a luthier in this town. I guess rather than setting up in a new business, I am carrying on a tradition of violin making in Bourges.

Fiddling about in French

In French those who make all forms of stringed instruments are known as Luthiers. (It seems that the word can also be used the designate the same trade in English). Luthiers not only make violins – the same in French and in English, they also make Violoncelles or cellos, Viols or violas, and, iven the time and money, a Luthier will also make you a Contre Basse or double bass.

There are naturally some “popular” violin-inspired expressions, though not all in current usage.

When a collective decision is to be made, you may still hear older people asking their peers to accordez vos violins or tune up your violins meaning “make your minds up” in the sense that everyone must play the same harmonious tune.

Presumably those behind bars had plenty of time to learn a difficult instrument. The French term for the clink was le violon

There was also a time that on a CV, the section on hobbies or spare time activities was referred to in French as the violon d’Ingres. Presumably, Ingres played a lot of violin in his spare time.

The only current violin phrase in popular usage would seem to be that describings acts so futile that they serve absolutely no useful purpose. Where Brits may urinate in the wind, the French will do it in a violin – pisser dans un violin.

As for fiddling, that very much depends what you are fiddling with. Il a tourné tous les boutons – he’s fiddled with all the knobs.

French children who fiddle or fidget too much are said to gigoter.  Exasperated parents with over active kids may say arrête de gigoter or if they are persistently playing with an object , they may say arrête de tripoter. The last verb, tripoter is fiddling, but in another sense could be translated as fondling.

There are regional variants for fiddling. In the Berry, for those who fiddle about with little result we use the verb pétasser.

Those who play second fiddle  are said to jouer les second violins.

A violin is made from over seventy different parts. It takes roughly 250 hours of painstaking work to make one and prices of the finished hand made instrument can vary from 5000€ to as much as 18000€. The most famous school of violin making is perhaps Cremona situated in the Po valley south east of Milan. Cremona is of course the home of d’Alessandro Stradivari (1644 – 1737) During his lifetime, Stradivari made about 1,100 violins of which just under 700 have survived.  A Stradivarius violin will of course cost you a little more than 18000€ – like classic cars, this is one of those areas where it is more expensive to buy “second hand”.  The highest price ever paid for a Stradivarius at auction was $3.5 million. At the “cheaper” end of the market though, a “Strad” can be had for about $1.6 million. Stradivari was making his best violins between 1710 and 1725.

It takes between three to five years to become a fully fledged Luthier. The most prestigious school is situated in Cremona in northern Italy. The “Scuola Internazionale di Liuteria” has produced some 800 luhtiers since it was founded in 1937 to marks the 200th anniversary of the death of Stradivari. The school sets high standards and all prospective students must be fully fluent in Italian before they ever think of applying.

There are of course violin making schools in France. The biggest is the Ecole Nationale de Lutherie de Mirecourct in the Vosges. Full details from the website below

In Britain you can learn the Luthiers art at the Newark School of Violin Making – part of Newark and Sherwood College. Full details can be had at the The British Violin Making Association web site (address below)