Hooray – Summer’s here and the time is right for … Well you won’t be dancing in the streets today. It’s raining. Not just a short shower or a drizzly interlude NO, this is real rain. Thick, thudding non-stop rain. Massive drops that fall and explode on you like miniature water bombs. Veritable cats and dogs, though in France, the locals prefer to say, it is « pissing like a cow » – though I have never seen a cow pissing at close quarters and I have no intention of ever getting close enough to witness bovine golden showers. 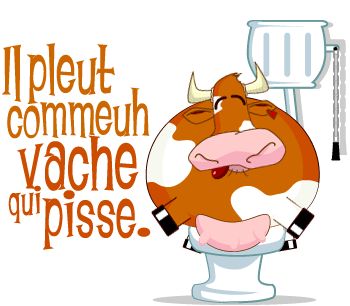 So, I used the golden shower motif with some reservation, and in a check on the Internet to see if there weren’t some people turned on by watching cows wee, I found this on a website – an old post dating from 2009 about a drink made from recently passed and sacred bovine waters.

New soft drink to be made from cow wee.

A hard-line Hindu organisation, known for its opposition to “corrupting” Western food imports, is planning to launch a new soft drink made from cow’s urine, often seen as sacred in parts of India.

The Rashtriya Swayamsevak Sangh (RSS), or National Volunteer Corps, said the bovine beverage is undergoing laboratory tests for the next 2 to 3 months but did not give a specific date for its commercial release.

Urine drinking (Yuck). However, there are certain religious sects in India where members drink their own urine, and I have also found plenty of articles on the Internet from people who extol the health virtues of urine drinking – such as this «glamorous » 63 year-old woman who drink a pint of her own urine everyday. (follow the link)

Or what about this couple?

Is their any coincidence that both of these articles appeared in the Daily Mail? Are there urine drinkers amongst the newspaper’s journalists?

Oh dear, all these people taking the piss – literally. It brings me to the subject of my elderly neighbours, who have just returned from a fortnight of « taking the waters » – two weeks « detox » in a regional spa town.

As keen gardeners, no sooner had my neighbours returned in the early afternoon, than they were out tending their vegetable garden. A couple of hours later, Madame came round and offered us some homegrown cucumbers and a couple of large marrows.

Now, though Madame may not do her bodily doings in the garden, I know for a fact, that Monsieur, when caught short, is not averse to exercising his excremental necessities on his compost heap. Many times we’ve caught him readjusting his trousers after a short squat on the compost. OH YUCK, we’re eating veg that this guy has S*** on. Yeah, but my neighbour only eats his own veg and then craps it all back on the compost heap. This is true recycling. This really is organic. And the veg tastes great.

I thought that it was only my elderly neighbour doing this. However in chats with other vegetable growing types, I have found that many of them are prone to an occasional and discreet dump on the compost heap. It’s as good as manure and its home produced, though I am reliably informed that the quality of one’s personal manure is only as good as the quality of one’s diet. So, be careful what you eat before you excrete at the end of your garden.

Of course these excrementory escritoires and scatological scribbling , were not the initial intended content of this post. I was merely going to write about the weather.

As a final thought.I have caught my neighbor peeing in his stare barrel. Nothing yes to waste. Could our cars ever run on urine?????