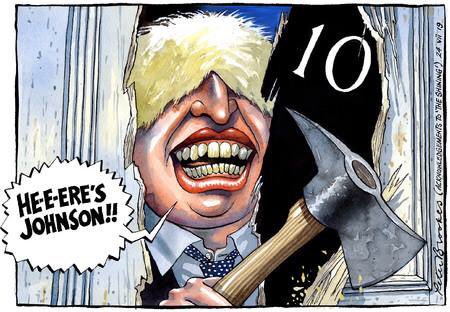 Pro-ro-ga-tion – Just over a week ago, I’m sure that most Brits (save those intrested in constitutional matters) had ever heard of this word. Then, prime Minister Boris Johnson decides to prorogue* parliament, which means

«the action of discontinuing a session of a parliament or other legislative assembly without dissolving it.»

So, Boris as far as I can ascertain has basically suspended Parliament for five weeks and is «ruling» Britain with his cabinet. This all seems a little Cromwellian, if not Orwellian. (Though Mr Johnson’s supporters might see it as Churchillian)

Remember that Boris has not been elected by a popular vote, he won the leadership contest in the Conservative party, and, being the leader of the largest party in Parliament, that makes him PM. Of course, it is worth reminding you, that the Conservative government has a majority of one and only remains in power thanks to the backing of the Democratic Unionist Party – a bunch of blinkered Northern Irish protestants with beliefs and policies dating back to the nineteenth century.

As an ex-pat, I’ve spent the last 28 years living in France. Two years ago I acquired French nationality, though I still feel British. Since the Brexit referendum three years ago, not a day has gone by that I haven’t followed the tangled, improbable, burlesque mess that is Brexit. At times laughable, at times unbelieveable, the mess that Britian now finds itself in is  now just unbelievably sad and certainly nothing to laugh about.

Casting an eye across the Channel, everyday, I am an incredulous and silent witness to the UK’s self destruction. My country of birth, the place I once called home, just seems to be slowly but surely tearing itself apart.

Now we are in a new phase on the agonising downward Brexit – prorogation, effectivly the suspension of democrtaic government in Britain. The country has become a one (conservative) party state – Cromwellian, though I would put Mr Johnson more in the mode of a Jacobean absolutist, galvanised in his leadership by some misguided belief in his divine right to deliver Brexit.

Why suspend Parliament? That way there is no chance to debate a Brexit deal, and Mr Johnson will deliver on his promise to deliver Brexit, and on October 31st, Britain will crash out of Europe.

Brexiteers, Little Englanders and nationalists everywhere will be jumping for joy. The right wing press (especially the Daily Mail) will be screaming «Victory» from their front pages and I daresay there will lengthy editorials on how Britain will be «great again»

Oh dear. Get real. Europe is the UK’s biggest trading partner, but financial and political considerations apart, Britain’s history has been inextricobaly intertwined with that of Europe since … 1066. Better than being outside of Europe, be part of it, and as for all that nonsense about being free – well we were free. For the forty or so years that the UK was part of the European Union, I don’t think that the domination of Brussels was such that the British parliament was unable to make its own laws and decide the nation’s destiny. Those were the lies propogated by Mr Jonson himself when he was the Brussels correspondant for the Times.

I won’t go into lengthy debate or discussion, I just think that over 200 years after the epic battle of Waterloo, Mr Jonson is perhaps living his Waterloo – a glorious final stand in a Napoleonic mode.

Predictions for the next few no-deal years – obviously the question of the Irish border – might we see Northern Ireland voting for cessation from the UK? Might this be the first step  on the road to a united Ireland?

We are looking to the break up of the union and (dare I say it) putting British politics back a few centuries.

One final, but flippant thought, does Brexit mean that the UK will be withdrawing from all European sporting competitions? Will we withdraw from the Eurovision song contest?, and will us ex-pats still be getting all our quirky British groceries in the local supermarket.

Only remains for me to wish you all good luck.

*What a rogue is that proroguing Mr Johnson