There was the pre festive frenzy; that mad magical mayhem the buying presents, the laying in of seasonal victuals and decorating. Those days in the lead up to Christmas when we deck the halls and dress our day-to-day dwelling in the gaudy accoutrements of the season – lights, tinsel, gold and silver balls … they shine out keeping the darkness and creatures and spirits of the cruel winter night at bay. The lights shine like a beacon of hope – like the far off glow of lights at an inn, a reassuring sign of respite and sustenance for weary travellers. They shine out like a lonely star in the night sky guiding Wise men on their quest for a king

This year though the lights have been fewer and dimmer. Those houses normally so lit up that they might be visible from space are invisible. Not a flicker, not a sparkle, almost invisible.

No lights. No hope. For sure we have made it through another year. We are happy that it’s Christmas but in the grey days of winter there is a spirit of grey resignation, a palpable despondency.

« Can’t be bothered with lights this year, » says a colleague at a somewhat sad and morose pre-Christmas workplace gathering. Too much effort, no time and an all-round lack of seasonal sprit. « What’s the point? » reiterates my colleague. « All that effort to put the bloody things up just so I can take them down a couple of weeks later. »

The media thunder away about (what the French call) the ambient morosity. Economic crisis, global warming, global warring, « the highest unemployment levels for a decade » announces one stony-faced newsreader. Things are bad, worse than bad and they can only get worse still. OH PLEASE! Tell us some good news. There must be something that will cheer us up.

In local shops and supermarkets, people are « going through the motion » without emotion. Crowds of shoppers stock up on mountains of victuals – Like that great Dickensian mountain of festive fare atop of which the sits the jovial ghost of Christmas present as he welcomes the mean and miserly Ebenezer Scrooge, with a hearty Christmas laugh. A great belly laugh filled with reassuring relish, hope and merriment like the peal of bells on Christmas morning.

Here though, queuing at the butcher’s counter there seems to be little appetite for Christmas, no matter how the rotund and red-cheeked jovial butcher tries to goad his customers with Christmas spirit. « Just a small turkey this year, » announces the lady in front in a voice as feeble as a small boy making a weak and wet excuse for his misdemeanor. Al the while, the lady tries to ignore the plump, majestic turkeys hanging above her. Turkeys in their festive finery, freshly-plucked save for a small feather collar, they hang lifeless, waiting to fulfill their one purpose in life – to adorn your Christmas table and satisfy your hearty seasonal appetite.

I imagine all those sad shoppers sitting down to their Christmas dinner as if it were a funeral wake. I imagine them tastelessly and morbidly masticating their way through their festive feast in Kafkaesque ritual. Franz Kafka, that depressing playwright who was rumoured to chew every mouthful of food 114 times.

Like Henry James and Sir Arthur Conan Doyle, Kafka was a disciple of an early 20th century dietary fad known as « Fletcherism, » Horace Fletcher; an American health food enthusiast argued that every mouthful food should be chewed at least 100 times before swallowing. Food chewed down into a liquid state is easier to digest. Fletcher also advocated that people examine their own excreta to ensure they were digesting well.

We are having a truly Kafkaesque Christmas. Oh, for a happy metamorphosis.

As we masticate our way in misery through our festive food mountain, we know that at least half of what we have bought will end up in the bin as it creeps dangerously near to its « eat-by » date.

Peeling Back the Layers of Christmas

Thanks heavens for the children – those last true repositories of the true spirit of Christmas. Starry-eyed and filled with hope, redolent of the Christ child himself (so our priest claimed at his sermon on Christmas Eve) They eagerly await Santa, refusing to go to bed, until, drunk with fatigue they flop into their beds and come Christmas morning, the old chap. has been. Brightly wrapped present sit thick under the tree. The children jump on them, ripping off the paper and … Christmas is over.

It’s all so quick and so unceremonious. After all the careful build up to this one moment, we reach festive climax and just don’t stop to enjoy it. We should carefully tear away the layers of paper on those gifts that have been so carefully, beautifully and lovingly wrapped. No, we just thoughtlessly strip away the layers of Christmas. Now you’ve got your gifts, what happens next?

We take our gifts back to the shop, exchange them for something we really want, or just try and get the cash. We sell our gifts on the Internet. We negate all the love, the time and the effort that someone has put into offering us a gift. Those minutes, hours or even days someone spent choosing something they thought we might like, that time that they spent thinking about us, that tile that we existed in the hearts and minds of those who love us or like us enough to « make the effort ».

New Heaven and a New Earth.

And now the gifts have been given, sold and exchanged. The food eaten, thrown up or thrown out. The decorations looking just a little limp and the tree losing its needles, we enter the festive limbo, that inter-seasonal purgatory, where we err as lost souls, wondering what we can do until New Year brings some kind of salvation. That moment when we can finally enter the New Year as if it were a new realm. We hope for a new Heaven and a new Earth as the old Earth fades away. For sure at midnight on December 31st, everything will change for the better. New start, clean start, clean slate, resolutions, good intentions. Why do we place so much faith in a simple calendar change – a man-made manipulation of time?

I like this inter-seasonal Neverland. It is a place/moment when time stands still. We drift on those post-Christmas currents that will “sail” us into the inevitability of New Year. Fight against the current all you want, in the end you just have to go with the flow, down to the river’s end and finally out into that great unchartered ocean that is the New Year.

Down on the banks of the mighty Loire – My chosen place of solitude. It is high tide and the current is flowing fast. No matter how fast or slow the river runs, it has only one destiny.

I am not alone on this grey, windswept, drizzly day. We are several errant souls, pacing up and down contemplating the river. Lonely souls in this forlorn winter place. We exchange brief greetings if we come face-to-face, but we are trying to avoid each other, each lost in his or her own thoughts.

In the late afternoon mist and drizzle my fellow walkers appears as ghosts. Perhaps they are. Trapped on this river bank as if in purgatory. Each ghost locked in its own time. Each lost soul waiting to cross the river.

It is a supernatural place. Houses, restaurants and cafés all shuttered up for the duration until those happier summer souls return to make the place live again. It is like a sad seaside town out of season. Come the long sweet summer days, the cafés open for business. Holiday homers take down their shutters and throw open their windows to let in the summer world. Day trippers come here for picnics – spreading their chequered rugs, to eat, drink, laugh and then snooze off their wine in the afternoon sun. Anglers wade out into the shallows, casting their lines far into the water in the hope of catching a succulent fresh water fish. People mess about in boats and Sunday cyclists pedal their leisurely way along the bank, and at the end of the day, lovers sit “entwined” at the water’s edge to watch the sun set into the flows.

I prefer this place in winter though. This riverside purgatory in its grey and ghostly guise. I like the shuttered-up houses – The sensible squat stout cottages that once belonged to local watermen. The many spired art deco villas that look as haunted as the errant lost souls on the bank. Rambling villas in various states of graceful decay. Crumbling mansions built into the remnants of old chateaux. It is all redolent of a bad B movie remake of the Shining.

I like it here because we are in the nakedness of winter. The world has long lost its glorious summer raiment, the season of mists and mellow fruitfulness has evaporated and withered away. This is grey winter – the grey skin that hangs on a skeletal winter world – all stripped and laid bare like a corpse awaiting the last rites before burial. In this inter-seasonal moment, Christmas has died like one of the Dickensian spirits and now we await the last rites of the New Year festivities.

Winding my way home through the steep, vine-covered hill sides of the Sancerre region.

I am always thankful that when God created this great good earth, amongst the flora and fauna he made to fill his creation, the Almighty saw fit to include the vine. What art and what foresight, giving Man the means to produce that nectar which our God Lord would take to symbolise his blood at the Last Supper. Every glass, every sip is a moment of communion, a moment for reflection and even a moment of redemption at the end of a hard day. What better time than this season to be in the vines, a few days after the birth of Jesus. 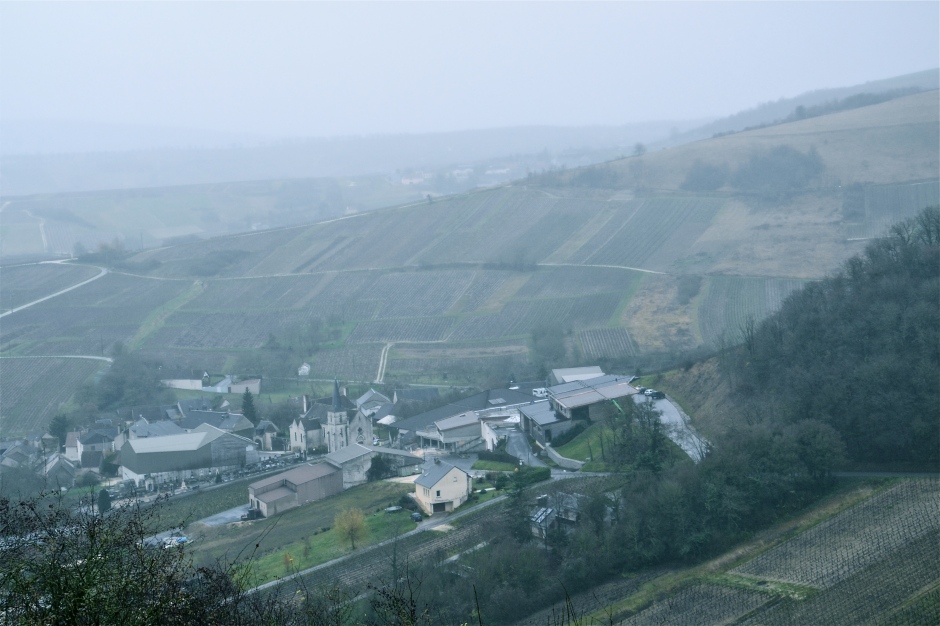 At this cold and skeletal time of year, the vines are like the baby Messiah – naked and vulnerable. Steep and rolling hillsides as far as they eye can see, all covered in naked vines. Looking down from my vantage point it is difficult to believe that over the seasons, these vines will bear any fruit.

Obscured by mist, the villages below become blurred, though sweet wood smoke rising from chimneys is a proof of the human presence. It is cold. It is time to head home for the sweet redemption that only a glass of good wine can bring.