Skip to content
You certainly don’t wanna live all you’re f*****g life on a trailer park with the homeless, stateless and hopeless, but you’ll sure as hell spend a whole lotta money to spend your holidays in a trailer on the pretext that it is within spitting distance of a posh French holiday resort – I’ve stayed in mobile homes from St Tropez  to Venice. They’re crap. They’re expensive. They fall apart. You are living in incestuous proximity to all your neighbor’s (and believe me; you don’t want to sleep with that Swiss woman two trailers away)  Yes, this is perverse, but I am fascinated by mobile homes. (Oh what a sad bastard I am. But I suppose it beats angling and car tuning) I am also fascinated by camping. Read on for mobile home meanderings, (and even some useful advice.)

Remember Big Brother ? That awful Reality TV show that darkened our screens during the Noughties. The concept was simple. Take a gaggle of publicity-seeking morons, lock them in a confined space for three months and then broadcast their antics on prime time TV. Drinking, smoking, swearing, arguments, sex … then every week ask the participants to nominate two or three of their number for «éjection » and then ask the TV audience to ring in and « save » the least awful of the would-be has-beens.

A holiday in a mobile home is not unlike Big Brother – take six or eight people (depending on the capacity of the mobile home) and shove them in a confined space for two weeks and then watch as the stresses and strains of close quarters family holiday living take their toll.

Your average mobile home (what the Americans might refer to as a trailer home) provides 24 to 28 square metres of living space. It is a flimsy wood and plastic construction that will probably just about stand a light shower or a summer breeze, but were there any serious huff and puff, it would collpase. Looking at some mobile homes you are prone to wonder if the first two little pigs were not working on the design team.

The mobile home has one distinct advantage over other caravans and many motorhomes – the designers have put in « bedrooms » – small spaces sectioned off by plastic « walls ». There are doors to enter and exit the room, however, when the mobile home shifts a little, it’s not sure that the door will actually fit back into its original « hole ». However unbedroom-like these minsicule bedrrroms might be, they are important because they give the occupants some form of seperate living space from the other occupants. Your average mobile home will have two bedrooms – a twin and a double –though in bigger models (32 square metres plus) you get three bedrooms

In addition to your 28 square metres of living space, the site owners generously add an 8 square metre covered wooden terrace/outside dining area. A very useful place to cool off after a blazing family row, when other family members are busy sulking in their bedrooms.

Having described the mobile home layout, you may wonder why anyone in their right mind would :

1 Rent one or their holiday.

To answer the first question, in terms of space, durability and comfort – the mobile home is better than a tent. It also offers more room than a caravan or camper van (American readers might refer to the latter as a motorhome or even a recreational vehicle)

The mobile home phenomenon now appears to have peaked. In the mid Noughties however, there were entire campsites that gave all their emplacements over to mobile homes, leaving no space for traditional canvas campers.

Pimp your ride. Take a bog standard family saloon. Tune it, re- tweak it, paint it up, dress it up. Add spoilers, aerofoils, chrome exhausts, enough headlights to light up a medium sized-provincial airport and a sound system so loud that I can hear you thumping out techno beats several streets away – well however good (or stupid) your car now looks, it is still a Ford Mondeo, in fact it looked better before.

So, pimp my mobile home. First buy a mobile home and then do it up outside to look like some kind of Bora Bora beach hut – right down to the thatched roof. When the outside is done, star ripping up the inside. Tear down the walls, install a jaccuzi, a king sized double bed. Deck the place out in tasteful Tahitian décor and charge almost four times the price of a bog standard mobile home on the site in Calais.

Tropical mobile homes are confined to certain sites on the French Riviera. Two or four berth, they most my seem to be rented by Brits and Germans (perhaps the only people who can afford them). Of course no matter how exotic your mobile home, it is still a mobile home and it is still sandwiched, cheek by jowl, up against similar mobile homes and why, for the sale kind of money don’t you rent a holiday cottage or an appartment.

Now I come to the next question. If holiday rental companies and campsite owners are charging so much for mobile homes, why not just buy your own ?

I saw an ad recently « Own your own mobile home for under 100 Euros a month » (99 Euros to be exact*) Sounds a good deal BUT, once you have bought the mobile home, you have to find somewhere to put it. Yeah, mobile does not mean mobile unless you have your own massive semi trailer / tank transporter to take the mobile home where you want it to be. You also have to find a site that will take your mobile home.

Most mobile homes are sold already on site. All plumbed in, plugged in on their own prim proper neat little emplacement – LOVELY … BUT BUT BUT – a word of warning. The site owner has invested in several mobile homes and then flogged them off to private individuals – it is now your home on someone’s site. If one day the owner decides that he wants to move your home to  different part of the site ? If he decides that all mobile homes will now have blue shutters instead of green or red imitation tile roofs ? What if the owner simply decides that he just doesn’t want anymore mobile homes on his site ? Well, either you comply with the owner’s wishes or you leave the site. No, buying your own mobile home is a con. Many campsite owners with permanent homes like to « replace » their homes after five years – meaning they do a massive buy back of existing homes and oblige owners to buy a new home if they wish to stay on the site. The price you get is never the same as the price you paid. Of course, you still own your mobile home, so you can unplumb it and unplug it and arrange for transport to another site – that’s expensive. 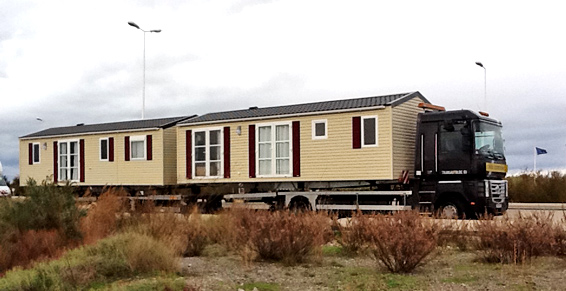 By way of info, prices for a decent mobile home start at around 40,000€ for a 20 metre square 4 to 6 berth home. Add the this the cost of installation on the site of your choice – a one of fee ranging Fromm 500€ to 2000€. Of course, your mobile home is on a campsite, therfore you have to ay site rental – anything up to 5000€ per year. Of course you want to make money on your mobile home, so you will rent it out as much as possible, paying a commission to the site owner for each booking and of course, you are going to rent it out all summer, meaning that you are not going to go when you want to go. Add to this repairs and upkeep of your emplacement and any other requsets from the site owner such as changing the colour of your shutters or adding new decking or … You are better off buying an apartment by the sea. And finally if you do choose to move your mobile home, count 2000€ for transport and of course you have to find a site who will want to take your home.

Hey, just buy a motor home. If all else fails, you can still use it as a replacement for the family car.

So tomorrow, I will take you to a posh campsite on the French Riviera complete with toilet blocks built in the style of Egyptian temples and Elvis Presley impersonators.