Decided to run some previously unblogged Christmas writings. Mostly personal stuff from my unfinished novel. No point in leaving them on my hard disk, might as well sure them with the world. I’ve called this one “Father Christmas” – concerning dad and Christmas parties of old. Enjoy

The trains are metallic blue, they weave slowly  through the suburbs like  long lazy snakes on valium. Inside the carriages are grubby grey floors and nicotine yellow paint. The upholstery smells of wet concrete, damp cloth, stale tobacco and the fluff that grows under toe nails

On a train. Jolting, lurching and screeching our way across the red brick of the south west London suburbs. This is the start of the journey into Christmas. I’m just tall enough to peer out the grimy window. Night is falling, and the train crawls along, so slowly that I can peek into peoples’ houses. Snatching a fleeting glimpse on someone’s life. The good folks of the world are lighting up and settling down for the evening., but we are going out. Up to London. Up to town. I’m five and my brother’s eight and we are dressed up to the nines – school uniform, the only outfits we possess with a shirt and tie, and like mum says – « What’s the point of you going to an expensive private school if you can’t show off the uniform ? »

The train pulls into the cavernous belly of Waterloo station.  Vast, mad, bad and noisy. The screech of brakes, the staccato clunk of hundreds  of train doors all slamming shut in quick succession, incomprehensible announcements on the tannoy. Commuter cacophony,  and station symphony amplified by the leviathan-like building. We are inside a monster. The vaulted iron rib caged hangs high above us, and as we climb down from the train and walk down the never-ending platform, the station swallows us up. From the belly, down into the very entrails of the beast . « Hold my hand » commands mum. She gives us her lecture about strange men in macs in station toilets. I want a wee, but I’m just going to hold.

Mum is looking for a member of station staff to get us a taxi. We can’t possibly go by Tube.

« When you go to the House of Commons, you have to arrive by taxi . » she says.

She doesn’t ask the man at the ticket barrier because he’s black. « Oh, he  won’t understand. » says mum dismissively.(Casual, generational racism born of Empire)  Instead she addresses a slovenly-looking, white member of staff.

« Yes, that’s right … a taxi for the Palace of Westminster. » Mum mouths the orders in her « upper class » voice, that she reserves for the working class or foreigners.

We are off to the Christmas party, thrown my the members of the press gallery at the House of Commons.

« My husband is a parliamentary correspondent for Reuters, » explains mum to the taxi driver, who really didn’t want to know, but now he does, and he should feel honoured to have such « posh » people in his cab.

As a five year-old, I don’t know what « posh » is. I just know that  if the party is as good as last year’s, it will be the best ever.

The taxi drops us at Westminster. Mum makes a great play of showing our embossed House of Commons invitations to the policeman at the entrance. He « salutes » mum. He calls her »Ma’am ». Mum likes this and with an air of superiority,  she glides into the Palace of Westminster, head held high, a cross between Royalty and Miss Jean Brodie

The party is great. There are bags of sweets , Coke, crisps, a massive Christmas tea, a magic show and finally, the moment that every kid has bee waiting for, when the huge double doors to the Common’s Chamber are flung open and we get to run amok. A riotous assembly of kids, screaming and whooping for joy, in that most serious and historical of places where the complex affairs of state are discussed, where the laws of the land are made, where the lives of millions are regulated and legislated. The weight of history, the fate of nations, the dramas that have been played out in the Mother of Parliaments and we are playing tag round the table where the Mace and Despatch Boxes normally sit, we loll round on the green baize benches like we have been lolling there all our lives. The final honour (or insult), we get to sit in the Speaker’s chair. This is the best bit of the whole party. Finally we are rounded up and led back to the members’ bar to await Santa, who promptly arrives and gives each kid a Cadbury’s selection Box.

The Press Gallery party was always the Friday nearest to Christmas. It was just as much for the journalists as the kids. It was their end of term party too. When it was all over, we would trundle home in the same grotty train that had hauled us up to London hours earlier. This was the moment where Christmas really began. The Commons wasn’t sitting and we knew that dad would be home for a whole week.

Dad had worked for Reuters since 1953.  He had started on the Africa desk. Over the years, he had risen through the echelons and made it into the press gallery at Westminster.

« Reuters Parliamentary correspondent. » Sexy sounding job, with a meagre salary, as mum later confirmed. Dad had to do quite a bit of freelance work on the side, to make ends meet. I found out years later that he wrote scripts for boys’ comic books. Dad was the official « voice » of « Dogfight Dickson » – World War One fighter Ace. 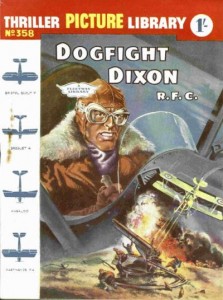 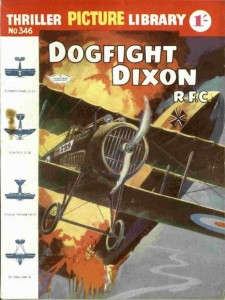 Dad’s offbeat literary activity would explain one of the more curious items I found when clearing out mum’s flat after she died.  A book from the House of Commons Library –

« The War In The Air Volume V » by H A Jones – from the Official History of The War. « Based on official documents from Imperial Committee of Defence. »

Published in 1935, before “The Great War” became the First World War, because the Second hadn’t happened yet. I daresay dad had borrowed the book for reference purposes, and just never gave it back.

My father would have been 22 on the eve of Word War Two. He was born on Thursday 13th December 1917, barely a month after the mud and blood of Passchendale.  « Thursday’s child had far to go, » says the poem. I don’t think that dad had much of a start in life. From the beginning it could only get better. His mum and dad (my grandparents) owned a cycle shop at 26, High Street Petersfield. Dad was a bit of an « accident », born a clear ten years after his elder brothers. Two parents running a shop, dad virtually dragged himself up. He didn’t seem to have much of a childhood, hence his efforts, especially at Christmas time, to give my brother and I all the trappings of a real childhood that he had never had.

Christmas Eve was always the pantomime at the Richmond theatre, down by the Green. Christmas morning we all traipsed down to the Presbyterian Church on Richmond Green. This was where all family « rites of passage » happened. Mum and dad got married here, my brother and I were christened here, and dad’s funeral service was held here. The Church is now luxury flats.

After Church, it was home for lunch and an afternoon of present opening round our real tinsel tree. Stacks of presents for big Brother and me. Sure, dad always tried to give is the Christmas that he had never had

Christmas was about the only time that we ever properly saw dad. Come the New Year he’d be back on the jumbled up life of parliamentary correspondent. Leaving home at lunchtime to be up at Westminster for the 3pm start to the day’s business. The Common’s day would finish around 10pm, and dad would come home around 11pm, sometimes it could be later.

The official end to Christmas was the first Saturday of January. Big brother and I would be dropped off at the Reuter’s Christmas party – always held in a draughty Church hall on the sinister grey fringes of the City. Mum and dad would « do the sales » at Gammages – which had the distinction of being the only department store in the Square Mile. The Reuter’s party wasn’t as good as the Press Gallery affair. We got a film show, a magician and our tea was a paper bag containing a fish paste sandwich and a slice of hard Christmas cake. 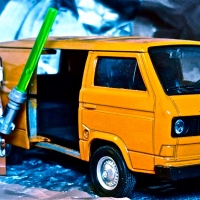