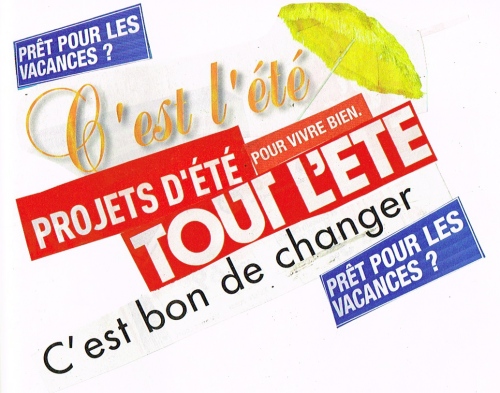 Summer’s here and the time is right for … Well there won’t be much dancing in the Streets today, unless you like Singing in the Rain. Grey skies and temperatures in the « teens » – feels more like early October than late June. Despite a mediocre meteorology, the traditional, timeless French summer rituals carry on.  School is out, the first holidaymakers are heading for their place in the sun and that most legendary of cycle races has pedalled off for the hundredth time. This year the « grand boucle » (the big loop), as the French affectionately refer to this national sporting and cultural institution, started in the Corsica, town of Porto Vecchio – the first time that the race has started in Corsica.

A cynic’s definition of the Tour de France – A couple of hundred blokes in tight lycra, all doped up to the eyeball on performance-enhancing drugs, puffing and pedalling their way around France to win a yellow T shirt.

Well no matter if all the riders are doped up and who cares if the eventual winner gets stripped of his yellow T-shirt title after a drug test proves positive – the Tour de France goes far beyond sport – it is a cultural thing.

The Tour de France is a sure sign that summer is here. As the riders push off on this, the first Saturday of summer, thousands of families are also pushing off on their summer break – two weeks in the sun.  And for the next three weeks, the happy campers will be following the Tour de France in their campsites, hotels, and guest houses. Under canvas, in caravans in chalets or at the local café – people will be glued to the tube (or computer or i Pad) watching the Tour, as it pushes off everyday around midday. No coincidence that the daily start time just coincides with the lunchtime aperitif. And then, after a hefty lunchtime BBQ– there is nothing better than slumping into a deckchair, watch the Tour and perhaps slipping into siesta – snoring off lunch.

Of course, not all the French are on holiday – we still have a full two months to head for our place in the sun. However, for all those who head off in July, their holiday rhythm runs to the Tour de France. Back from beach by midday for the start of each stage, then back to the beach at five when the stage finishes.

So, I fall more in the cynic’s definition of the Tour de France. This won’t stop me from watching it though. There are plenty of people who hate cycling, but still watch the Tour – simply because it is a chance to see this wonderful country in its full splendour. As helicopter borne cameramen film the Tour from the skies, they also film some wonderful landscapes. As the Tour winds its way through the French countryside, we get pictures of  « la France Profonde » deepest France – quaint villages with the Church, the café, the Boulangerie, the Mairie, the two-pump petrol station – all those clichés which are still part and parcel of rural France.

On the doping front – well there has always been some kind of doping in the Tour de France. In the early years, the riders might take what the French call « remèdes de Grandmère » – grandma’s old time, sure-fire recipe for a « pick-me-up ». In the late twenties there were reports of some riders taking cocaine. In the fifties and sixties, many of the riders were filled up with amphetamines, and then along came steroids and in the nineties we got EPO. In 1998 came the biggest doping scandal on the tour leading to the entire Festina team being banned. Of course you can’t forget Lance Armstrong, recently stripped of his 7 Tour titles – no one has yet been attributed the Armstrong victories. Cycling is rife with doping, even right down to amateur level. There are plenty of Sunday riders who take a little something to boost their performance.

Anyway, time to finish this post and watch the Tour de France, if only to see some of the beautiful Corsican scenery.